The parents of children with disabilities are calling out 

Outraged parents of children with disabilities and special educational needs or special learning difficulties are preparing to take to the streets to find their right. The problem is found in the plans presented by the Ministry of Education to parents for special education. At the beginning of August, at the conference presented by the Ministry of Education on the subject of special education, the Cyprus Federation of Organizations of the Disabled (KYSOA), the ADHD Association and the “Embrace of Hope” Organization walked out in protest. The president of the “Embrace of Hope” Organization, Youla Pitsiali, talks to “Simerini” about the problems their children face, about their differences with the Ministry of Education, and about the protest they intend to organize.

It is recalled that, on August 22, the Council of Ministers approved the creation of a Special Education Evaluation Center, with the Minister of Education, Prodromos Prodromos, stating at the time that, based on a report submitted by the Ministry of Education and proposals for improving the procedures and strengthening special education, the Cabinet has taken some decisions, taking into account the continuous increase in numbers in special education. “In the 2021-2022 school year, we had around 13,500 students in special education. To understand the increase compared to 2014-2015, from 8,200 children we have reached 13,500. In the Government’s effort to strengthen the procedures, to speed up some procedures where there is some delay, but also to improve the schools, it was decided to create a Center for the Evaluation of Special Education, which will use scientific expertise, will be staffed by appropriate scientific personnel and there the general decisions and directions will be taken, which the Ministry of Education will call for implementation”, as he explained.

He noted that the operation of the Special Education Evaluation Center will be implemented after the Ministry of Education has previously brought the relevant legislative regulation “to improve the operation that has existed until now through the system of the District Committees”. The Minister of Education stated that a second decision concerns the strengthening and specialization of diagnoses that begin in schools. “From 2022-2023, a diagnostic procedure will be carried out for pre-primary children and children in the 1st year of Primary School. We will make sure that these diagnostic procedures are strengthened with specialized tools”, he said and added that “it concerns the strengthening of the 9 special schools we have, with psychological support services and regular school medical monitoring and supervision”. Mr. Prodromou pointed out that the Council of Ministers authorized the Ministry of Education for the final assessment and the potential coverage of additional needs for school assistant escort services ahead of the 2022-2023 school year.

Parents claim the inalienable right of their children to uniform education

The President of the “Embrace of Hope” Association, speaking to “S”, said that “the parents of children with disabilities in Cyprus are preparing to claim the inalienable right of their children to uniform education with a protest against the violation of the rights of children with disabilities in education and their exclusion from the single vote. The protest will be attended by parents, organized bodies – ensembles, but also people who want to support children’s rights”, he said.

Mrs. Pitsiali emphasized that this protest must be held, because there is no other chance. There is no dialogue with the Ministry of Education either, he said, adding that they have been closed for years, while children’s rights continue to be violated. As he complained, “they leave them without an education and condemn them to a reduced education either by excluding them directly – that is, not allowing them to enter the classrooms with their classmates as provided for in the United Nations Convention on Persons with Disabilities – or indirectly – such as we saw it happen this year to a more intense degree than other years, which condemns them to the exclusion of not succeeding in their studies, taking away benefits and companions”.

Regarding the creation of evaluation centers, he stated that “the Minister of Education informed them that this committee will be created to decide under which framework the children will study and no one will question their decisions and we reject this evaluation if the reason for its existence is to separate children”. “It is the right of all children to be where other children are and to be educated,” he stressed. He continued that “this evaluation should be done by the children’s teachers who will suggest the benefits that can be done or by a specialized group that will see what benefits the school should provide to address the child”. Ms. Pitsiali emphasized that disability does not prevent them from education and that today no disability with the technology that has evolved and the means that exist can stand in the way of a child’s learning. As he said, the Association does not accept that when someone sees a child, they can judge whether it is educable or not.

Finally, he referred to the “Embrace of Hope”, explaining that it is a pan-Cypriot organization of parents and friends of children with cerebral and other paralysis, who need representation to claim their rights and get support. The goal of the organization, he added, is to implement a uniform legislation for uniform education without discrimination and exclusion. 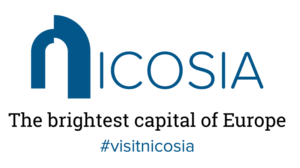 The Tourism Development and Promotion Company (ETAP) of the Nicosia Region, in collaboration with the 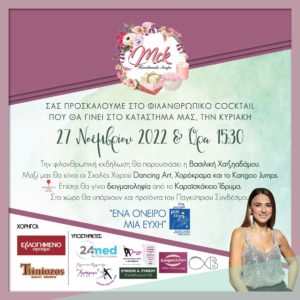 For the 5th year, the Mck handmade soaps store will organize a charity bazaar on 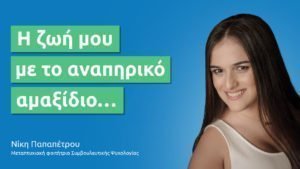 My life in a wheelchair…

When we hear the word “children” we imagine children running carelessly here and there, their

19 November 2022
This site is registered on wpml.org as a development site.